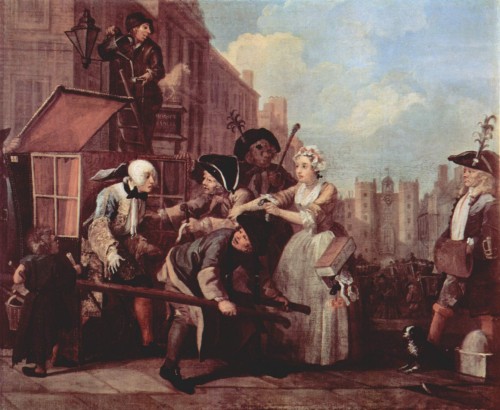 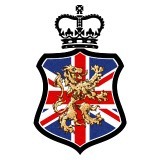 Uploaded to William Hogarth — 1 year ago

IV – The Arrest
In the fourth, he narrowly escapes arrest for debt by Welsh bailiffs (as signified by the leeks, a Welsh emblem, in their hats) as he travels in a sedan chair to a party at St. James's Palace to celebrate Queen Caroline's birthday on Saint David's Day (Saint David is the patron saint of Wales). On this occasion he is saved by the intervention of Sarah Young, the girl he had earlier rejected; she is apparently a dealer in millinery. In comic relief, a man filling a street lantern spills the oil on Tom's head. This is a sly reference to how blessings on a person were accompanied by oil poured on the head; in this case, the 'blessing' being the 'saving' of Tom by Sarah, although Rakewell, being a rake, will not take the moral lesson to heart. In the engraved version, lightning flashes in the sky and a young pickpocket has just emptied Tom's pocket. The painting, however, shows the young thief stealing Tom's cane, and has no lightning.